Published in 2006,  David McCullough’s 1776 has become a contemporary classic.  It is a must read for anyone interested in the American Revolution, including our Education Program Leaders! Check out EPL Will’s review of this bestselling book.

“Depending on one’s point of view, “revolution” has different connotations. To those not 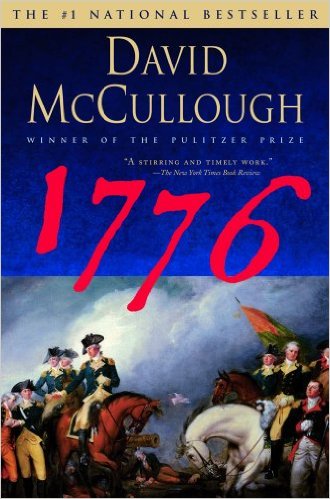 okay with the status quo, revolution seems exciting, provocative, and even praiseworthy. To those with whom status quo brings comfort, it may seem rebellious, foolish, and a nuisance. Attempting to capture differing perspectives, opinions, and vantage points on what happened in the year of the American Revolution and the Declaration of Independence is no small task.  Telling the dramatic story of the birth of the United States of America from the eyes of a multitude of key players on both sides of the war in a compelling manner with historical accuracy would seem insurmountable, if not for 1776.

“1776, by Pulitzer Prize winning author David McCullough, gives a boots-on-the-ground understanding of the struggles, the joys, the infinite heights, and the disparaging depths that soldiers faced in the American Revolution. David McCullough does an exquisite job of portraying the oft told American soldier perspective, but sublimely captures the perspective of the British as well.

“The detailed descriptions McCullough gives of the various battlements, characters, terrain, and even weather, could easily lose a reader and make a 2290-page book dry very quickly. Yet, McCullough does an excellent job of keeping readers’ attention by capturing the raw emotions of those who had a front row seat to the conflict. I often found myself on the edge of my reader’s chair even though I knew the outcome. For instance, George Washington is portrayed throughout history as a war hero with military and political genius — a saint-of-sorts in eyes of America; and he rightfully deserves it. But McCullough helps humanize Washington by sharing details about him and his decision making that cost lives, strategic military advantages, and nearly the war. McCullough tells of a well-respected man who at key points throughout the campaign lost the respect of some of his most trusted military advisors.

“McCullough gives an in depth look at soldiering and the difficulties therein — particularly with an ill-equipped, underfunded, outnumbered, inexperienced, and undisciplined American army.  Given the state of things, it is a wonder that America is here today.

“Overall this historical novel does an excellent job of telling the stories, both those well-known and little heard of, of the American Revolution in great enough detailed to be understood and believed.  This book appeals to both history buffs and avid novel readers alike. It gives an education on historical content and steward human emotion as you read what these people went through – some for the sake of their country pride and some for their livelihood.”